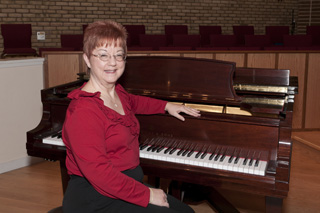 Deborah Panell, Minister of Music, is a life-long Presbyterian whose early years were spent in Huntington, WV. She attended the College-Conservatory of Music at the University of Cincinnati where she earned her Bachelor and Master degrees in Organ Performance. During graduate school, she began working as the music director at a Disciples of Christ Church in northern Kentucky where she developed a "graded" choir program, began a bell choir, served as organist, and youth director. Between 1975-1991, Deborah also held full-time, consecutive positions as the Development Director for WGUC-FM, the classical public radio station affiliated with the University of Cincinnati and as the Development Director for Playhouse in the Park, Cincinnati, Ohio's regional professional theater.

In 1991, Deborah moved to Richmond, VA to take the Development Director's position at TheatreVirginia. She also served as the substitute organist at various churches in the Richmond area. In 1992, following her marriage to Larry, she took a 3-year "vacation" in Germany, enjoying the culture and sights. Upon returning to the States in 1995, she began working at Manassas Presbyterian Church as interim organist. This developed into a permanent part-time Director of Music position in 1996. Since that time, Deborah has developed a fully "graded" singing choir program for kindergartners through adults, expanded the bell program and training programs for children and teens that incorporate Orff instruments and bells, organized choir trips which include trips to Vienna and Prague, and co-directed several full-scale production projects, including Godspell.

Deborah coordinates and administers all choir related activities at MPC and works closely with other local church musicians to provide ecumenical musical activities including the Northern Virginia Handbell Festival, Choristers Guild Festival, and Voices United festival. In addition to providing music for morning worship and special services, Deborah schedules choirs to share their music outside the church, including retirement homes and transitional housing communities. She also serves as staff support for the church's Worship/Music Ministry Team.